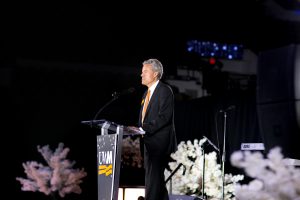 The University of Wisconsin-Milwaukee (UWM) announced Thursday its multi-year fundraising effort has brought in $251 million.

The fundraising total, unveiled at a campaign finale celebration at the UW-Milwaukee Panther Arena, is the largest in the school’s history and exceeded its original goal of $200 million.

UWM went public with the comprehensive, university-wide effort, “Made in Milwaukee, Shaping the World: The Campaign for UWM,” in fall 2017, after quietly raising funds since July 2012.

“I am profoundly grateful to our donors for the tremendous success of this campaign,” said Mark Mone, UWM chancellor. “Their generosity will benefit our students, research and community engagement for years to come. UWM has made extraordinary strides during this campaign. We’ve opened new spaces, launched major initiatives, and helped thousands of students through scholarships.”

During the campaign, UWM opened two new buildings on its main campus: the Kenwood Interdisciplinary Research Complex and Lubar Entrepreneurship Center and UWM Welcome Center. The university is also planning a $7 million expansion of the Klotsche Center.

More than 21,000 donors contributed to the UWM fundraising campaign, nearly half of which were first-time donors. UWM received more than 70,000 gifts in total. The breakdown of donors includes: alumni (27%), corporations (22%), individuals (20%), nonprofit organizations (17%) and foundations (14%).

Seventy-eight donors contributed at least $1 million during the campaign, about more than $36 million came through estate gifts.

“Donors play a critical role in the health of a university,” said Patricia Borger, vice chancellor for development and alumni relations. “The outpouring of support from UWM’s alumni, friends, faculty and staff, as well as from businesses and foundations, is inspiring. Our campaign co-chairs generated passion through their significant gifts and enthusiastic leadership. I am deeply grateful for everyone who took part in this campaign.”